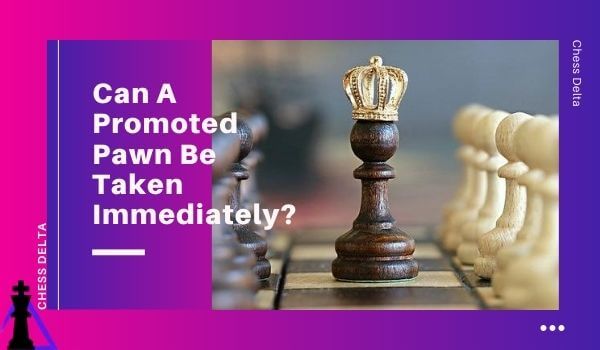 Whenever a pawn reaches the 8th rank it is time for its promotion! Most of the chess players promote and feel relieved that now they can win easily. But, then suddenly your opponent snaps your promoted pawn. So, at that time the very first question comes to your mind.

See if you are not violating any chess rule then you can definitely do that. There is no rule in FIDE Laws that says you can’t take a promoted pawn immediately. So keep that in mind.

Now that you know that a promoted pawn can be taken immediately, you might think why is this so. Therefore answering your next question.

Why a promoted pawn can be taken immediately? Because promoting a pawn is itself considered a move. So if your opponent promotes a pawn, now it is your turn to move. If you see that you can easily kill the promoted pawn then you should take that immediately.

But make sure you fulfill the conditions that we talked above and are going to discuss ahead in detail.

Let’s summarise whatever we are going to discuss in this article through this table of content and then dive into it!

In simple words, pawn promotion means whenever the pawn reaches the last rank it gets the chance to get promoted. It can either be promoted to a queen, rook, knight, or bishop.

Many chess players don’t say it and many times say it as a promotion. Both are correct because anyone can understand the motive of saying it.

As per FIDE article 3.7.5.1, when a pawn reaches the other side (8th rank) it can be promoted to any of the four pieces from the queen, knight, rook, or bishop.

One important thing to note that you are free to select ‘any of the pieces’ as per FIDE. There is still a very common misconception among many players about this topic.

As you can see that it is clearly mentioned, “Choice is not restricted to a previously captured piece.” Also, the effect of pawn promotion is immediate.

So this was a brief description of pawn promotion. Now we let’s move forward and talk about what are the chess rules we have to keep in mind while taking a promoted pawn.

Rules-To keep in mind while taking a promoted pawn

There are two rules you have to keep in mind while taking a promoted pawn immediately.

Many times while playing chess we overlook and overestimate the situations. In that case, it happens that we forget the fact that we are in check.

Rather we try to go on and take any other chess piece of an opponent! This is completely illegal. Of course, if you are playing online or with a computer, the system will not allow you only to make any move unless you get out of check.

But this you have to keep in mind when you are playing casually with your friends or even if you are newbie and playing in club tournaments. This silly mistakes might put you in shameful situations many time.

So always, before making any move, be sure that you are not in check!

Of course, you can take the promoted pawn if it is the best possible move and shock your opponent. But if doing so you get into check then that is totally illegal move.

Though this type of situation occurs very rare but is possible. If happens then you cannot because as per the rules you have to first get out of check.

So these are the two basic rules you have to follow in order to take a promoted pawn immediately.

Tip 🙂 – Do you ever think: Why would you promote a pawn to a rook and not queen? In which circumstances with a case study, then check out my detailed article on the same.

When can you take a promoted pawn immediately?

You can take a promoted pawn if you are not in check neither get into check by doing so. Here is a case study highlighting this point.

Read Related: Can you promote a pawn to a second queen?

Note that it is white’s turn to move.

So now, from the below image what do you think, should it take the promoted pawn or make any other move? Let’s discuss this pointwise.

So considering all these factors taking the promoted black pawn (into queen) on b1 square by white’s rook on a1 square will be the best decision.

Now this was the case where you can take promoted pawn but sometimes though rarely it can happen that doing so will not be a wise decision. Hence we come to our next question.

Tip 🙂 – Can a king take a queen in chess? Are you curious to know this! Then check out my article on the same where I explained the reason with case studies.

When can you not take a promoted pawn immediately?

You cannot take a promoted pawn immediately if by doing so you get into check or when you are already in check.

Here’s is another case study that i made for you so that you can understand the concept well. Let’s discuss!

Note that it is black’s turn to move.

So this how there are circumstances where we can’t take the promoted pawn immediately. It can put us in check and sometimes also prove to be a bad move for us. While playing chess you should always keep in mind this one thing,

Every rule in chess should be followed according to the position and evaluation plus keeping the mind open!

Ask these 3 questions before taking a promoted pawn (Tips)

Now studying the above cases it can be said that you need a perfect method, roadmap and guideline before you attempt to take and kill a promoted pawn.

So here’s a set of three questions that I ask before taking a promoted pawn immediately, and I think that will also help you so they are,

If the answer to the first two is no and the last one is yes then you are good to make the move. Otherwise, you should react according to the problem that arises.

Also Read: Can a pawn move diagonally to promote?

So that’s it! Hope you enjoyed reading this article. Please do share if this article helped you. Here’s a quick recap of everything we discussed.

Hope this helps! Thanks and have a nice day!

Tip 🙂 – Do you know: Can a pawn check a king? If eager to know and much more related concepts then I recommend you to check my article on the same.

By the way, below I have listed down some of the frequently asked questions. You can check them out, who knows if it can clear some of your doubts.

Do you get an extra turn when you promote a pawn?

No, you don’t because you move your pawn to 8th rank, promote it and your turn ends. It is now your opponent’s turn to make a move.

Where does a promoted pawn go?

After pawn promotion, the promoted pawn goes outside of the chessboard. The promoted pawn is replaced with either the queen, knight, rook, or bishop depending on the player’s choice.

How many times can a pawn be promoted?

How many pawns can be promoted?

Can you move after pawn promotion?

No, a player can’t move after pawn promotion because pawn promotion is itself considered a move. So as soon as a player promotes the pawn, it is their opponent’s turn to make the next move.

Wait! I have a special announcement for you! Are you a beginner and want to learn how to play chess? Then check out this free step-by-step guide on chess basics where I clarify all your chess concepts right from scratch.