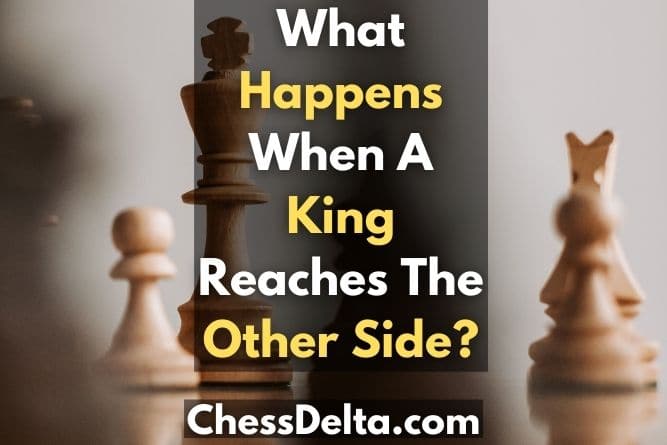 Once, when I was playing chess with my younger sister, her king made it to the other side and she looked at me as if she won. But, I said no. And, she asked me a question which you may be also thinking right now, what happens when a king reaches the other side?

A chessboard is not like a place where all the chess pieces are racing against each other. It is not that the piece reaching the finishing line wins the game.

Remember that you can win chess only by one of the following ways:

I have written an article on how many you can win chess and in that, I have discussed each of the cases one-by-one and in detail. So I highly suggest you check that out.

So now you are clear about how a chess game is won and the objective of the game. But you be thinking about the pawn, what is a promotion in chess, and how a pawn gets promoted, right?

What is pawn promotion?

As per the standard rules of chess, when a pawn reaches the other side on the 8th rank, then the player gets the chance to replace it with either a queen, knight, rook, bishop or pawn. This is known as pawn promotion.

Since the pawn can be replaced with a piece of higher value this move is called promotion. Remember that a pawn can’t be promoted to a king or another pawn.

You can read more about this and all the rules of pawn promotion in my article what happens when a pawn reaches the other side.

Now as I told you earlier only the pawn in chess has this special move of pawn promotion. No other chess piece can promote itself when they reach the other side.

So you may think why piece other than pawn are not allowed for promotion, right? So let’s discuss that!

Why piece other than pawns can’t be promoted when they reach the other side?

Simply because it would disturb the balance in the game. Just imagine if all the chess pieces were allowed to promote themselves whenever they reached the other side.

Pawn is the weakest chess piece and so allowing it for promotion still balances the power. But just imagine if the most powerful piece in chess, the queen was allowed for promotion.

Also, it makes no sense if the king is allowed to promote itself when it reaches the other side. First of all the whole chess game revolves around the king. Checkmating the king is each player’s ultimate goal, right?

Moreover, if you promoted your king to any other chess piece then for whom you would be fighting through out the game, just think (haha 🙂 )

A lot of chaos would be created and many rules would have to be changed if that happened. Right?

So I hope you got my point. Now let’s discuss why a king would need to reach the other side.

Why and when a king reaches the other side?

Generally, at the start of the game, the king sits beside all its chess pieces. But then slowly as the game reaches more closer towards the game then the strength of the king gradually increases.

A king moves in chess one step in any direction as long as it doesn’t put it in check. During the opening phase, there are more opponent pieces that can easily threaten the king.

But during the middle game, many pieces are exchanged and so when the game reaches more towards the endgame the king gains more space to march around the board.

So it may happen that while chasing your opponent king, you made your king reach the other side of the board. It is perfectly normal.

In fact, in many checkmating you need the support of your king along with your other chess pieces to push the opponent king to a side or to a corner of the board and then checkmate it.

Also Read: Do you have to move your king in check?

Generally, a king is considered weak because of its limited mobility but remember that it is not the weakest chess piece. You can also read my article Why is the king so weak in chess? to know more.

That’s it! Hope I was able to clear all your doubts. If you found this article helpful then please do consider sharing this with others. Thanks!

What happens when a knight reaches the other side?

When a knight reaches the other side then there is no change in the status and power of the knight. As per the standard rules, only a pawn in chess gets promoted when it makes it to the other side. The status of the rest of all other chess pieces remains the same.

Can a king become a queen in chess?

No, a king can’t become a queen in chess. In chess, only a pawn can become a queen by the special move of pawn promotion which occurs when a pawn reaches the other side on the last rank.

Yes, a king can kill sideways and in any direction up to one square as long as doing that doesn’t put the king in check. As per the standard rules a player can’t make a move that leaves their king in check or exposes it to check.