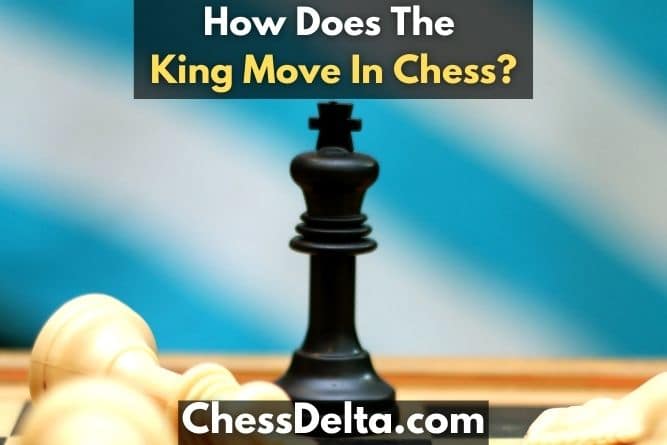 In chess, there are 16 chess pieces on each side. Out of them, the king is the most valuable chess piece. But do you know, how does the king move in chess?

The king moves only one square at a time in any direction. It also has a special move called castling. A king can capture any enemy piece as long doing that doesn’t put it under attack.

Continue reading till the end because I will be sharing with you almost everything you need to know about how the king moves in chess. So let’s get started!

How many spaces can a king move in chess?

A king can move only one square or one step at a time in a single move but in any direction. So if all the surrounding squares next to a king are empty, then there are actually 8 possible ways you can move your king in any direction.

But remember, you can only move your king to any one of those possible squares in a single move.

Can a king move two spaces in chess?

Castling is the only move that allows the king two steps. Rest, all the time in the game of chess, a king can only move one step at a time.

The king can only move one step generally and in only in castling it can move 2 steps. To know more about how the knight moves in chess read my complete article about it here

Can a king move diagonally in chess?

To know more about which chess pieces can move diagionally, check out my complete article on it here.

Can a king move backwards in chess?

I also have an article on can chess pieces move backwards which I recommend you to check out if interested.

How does the king move in castling?

Castling is a special move in which the king moves two steps on either the right or left side, while the corresponding side rook moves just the opposite side of the king.

This is the only move in chess in which two pieces move simultaneously in a single move.

There are two types of castling, one is kingside castling and another is queenside castling.

Kingside castling is a type of castling in which the king moves two steps on its right side while the rook on that side just moves one step beside it on the left.

Queenside castling the king moves two steps on its left white the rook on that side moves one step beside it on the right.

I have already written an in-depth article on Kingside castling And Queenside castling, which you can check out for further information.

Now note that the king can’t move always in case of castling. There are four rules of castling you need to know.

If you follow the above four rules then only the castling would be considered as a legal move. Also, remember that you can’t do castling with two hands as it is illegal.

What is the position of the king in chess?

A king is the tallest chess piece and can be identified by the crown with a cross on the top. There is a total of two kings in chess and both of them are placed on the e file, one on the first row and another on the last row, facing each other.

In chess, the horizontal rows are called ‘ranks’ whereas the vertical columns are called ‘files’. There are 8 ranks denoted on the side of the chessboard using the numbers from 1-8.

While the files are denoted by the English alphabets from a-h. So on the e-file square of the first and the last rank, the kings are placed.

How does the king attack and capture in chess?

A king can attack and capture, any opponent piece standing next to it as long as doing that doesn’t put it in check. However, one king can’t capture another because doing that also puts the first king in check which is illegal.

This concept of one king can’t approach another king is also known as ‘opposition’. So in simple words just remember that one king always opposes the enemy king.

I have already written an in-depth article on can a king capture another king in chess, which you can check out for more information.

As you can see in case – 1, the king can’t capture because doing that, would not put the king in check. So no rules will be violated.

You can read more about this in my article can the king kill in chess.

Can a king move 2 spaces to kill in chess?

A king can’t move 2 spaces to kill in chess. A king can only move one space to kill any chess piece. Even while castling, when the king is allowed to move 2 spaces, the king can’t capture any piece because it will be illegal to do so.

The reason for it is because the piece to be captured while the king castles will be present between the king and the rook.

And as per the standard rules, castling is temporarily prevented if there is any piece between the king and the rook with which castling is to be effected.

To know more about when can you castle in chess please check out my complete article about it here.

Some important concepts related to king

In simple words, check means when the king is in threat. So whenever you are in check that means you are being attacked by your enemy pieces.

Here in the above image as you can see, the white queen has attacked the black king. So in chess terminology, it would be said that the black king is in check

However, you don’t need to worry because there are three ways to escape from this check.

In the above image as you can the only way left for the blacking to escape from the check is to move the king away to a safer square (the safer squares are marked in the images with green ticks).

Here blocking the check or capturing the attacking chess piece is not possible.

You can read more about all these in my article do you have to move your king in check.

It is a situation in which the king is in attack (check) but it is not possible to the king out of it. So whenever a checkmate occurs then it means you have lost your all hope of saving the king.

Think of the three ways to escape check I discussed with you earlier and analyze why they are not applicable. If you are thinking that the black king can kill the attacking chess piece, the white queen, then you are wrong!

And as we know it is illegal to move your own king in check, so here the black king can’t get out of check. This is how here checkmate occurs.

You can read more about checkmate rules here.

Now there is another case that occurs in which the player’s king is not in check but the player has no legal moves left to continue the game. This condition is known as a stalemate.

Whenever this occurs, the game ends in a draw immediately. As you can see in the image the black king is not in check. But there are no squares left where the black can move the king.

Also, the black pawns are also blocked. Since the pawns can’t move because there is an enemy piece in front of each one of them.

So in all, there are no moves left for the black to make, isn’t it? Thus the game ends in a draw.

You can read more about stalemate and its difference with checkmate here.

▪️Whenever the king is in threat then it is said to be in ‘check’.

▪️There are three ways of escaping from the check.

▪️Once the king is in check it is mandatory to first take it out of check and then only make any other move. Leaving your king in check is also considered an illegal move.

▪️When the king is in attack and there’s no way to save it then this condition is called checkmate.

▪️A king cannot be captured but can only checked or checkmated.

▪️If the king is not in threat (check) but still the player doesn’t have any legal moves to make then this condition is called a stalemate. The game ends in a draw immediately whenever it occurs.

You can read more about this in my article on can you castle out of check.

I hope now you exactly know how does the king exactly moves in chess. You may also like to read my Chess Basics Series in which I teach you how to play chess, step by step in various lessons. It will be helpful to you if you want to learn chess, especially if you are a beginner.