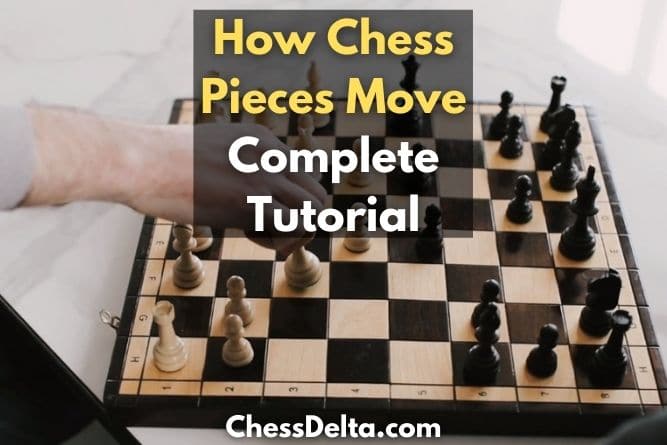 After you know the basic things like the chessboard structure and how to arrange the pieces, it is time to learn how chess pieces move.

In short, the rook moves only horizontally, bishop only diagonally, queen both horizontally and diagonally, a knight in L shape, king in any direction but up to one step, while the pawn in the forward direction one step (two-step in the first move). Except for pawn, all the chess pieces can move both backward and forward in chess.

Now let’s see along with pictures and in a little more detail how the chess pieces move.

A rook moves horizontally and vertically both back and forth.

How does a rook capture? It captures any opponent piece that comes on its way. But remember, capturing two pieces in the same turn is not allowed in chess.

To know more you can read my in-depth article about the rook moves in chess.

A rook can also do ‘castling’ (a special move). Castling is a move in which the rook and the king both move together simultaneously in a single move.

The king moves two steps on either left or right side and the corresponding side rook moves just beside the king.

As you can see above there are two types of castling one is kingside castling and another is queenside castling which you can check out for further reference.

A bishop can move backward as well as forward but only on the diagonals. (You may also like to see the article on names of all the chess pieces)

To know more read my detailed article on the bishop moves in chess.

A queen which is generally considered the most powerful chess piece can move both horizontally, vertically as well as diagonally, front and back.

How does the queen capture in chess? A queen, in the same way, can capture or take a piece that comes on its way. However, a queen can’t jump like a knight, neither can a queen move like a knight!

A knight moves in a typical L shape pattern. First, it moves two steps straight and then quickly takes a turn on the immediately adjacent square as you can see in the image.

How does the knight capture in chess? A knight can capture an opponent piece only if that piece is occupying the square where the knight is going to land. It is the only piece that can jump over the other pieces (whether own or opponent pieces).

A king moves in any direction but only up to one square.

How does the king capture in chess? A king can capture an opponent piece except for the opponent king.

Remember in chess one king can’t take kill another king because that is considered an illegal move.

In short, the reason is: As per the standard rules of chess it illegal to put the king under threat, and while approaching another king both the king get into threat and so it is not allowed.

For a detailed explanation, you can read my article on can a king capture a king in chess.

The special move of the king is castling which I already explained to you. So let’s move on to our next chess piece.

A pawn can only move one step forward throughout the entire game. However, on the first move of the pawn, a player is allowed to move the pawn two steps if he or she wants.

It can capture a piece only when it is on its very next diagonal square in the forward direction. A pawn can also capture on its first move if the said condition is fulfilled.

There also two other special moves associated with pawn which I highly recommend you to read each one of them in detail for better understanding.

Whenever a pawn reaches on the last rank of the opposite side of the board then the player can replace that pawn with either of these four chess pieces, queen, knight, rook, or bishop. This is known as pawn promotion.

Remember that the pawn can’t be replaced with another king nor with another pawn. Also, it is not mandatory to replace the pawn with your previously captured pieces.

You can read more about pawn promotion and its rules in my article on what happens when a pawn reaches the other side.

This is a special move in which the pawn on its 5th rank captures the opponent pawn (on the adjacent file) that moved two squares assuming that it moved it only one square.

You can also read more about en passant.

So now that you know how the chess pieces move it’s time to move on to our next lesson of the chess basics series.