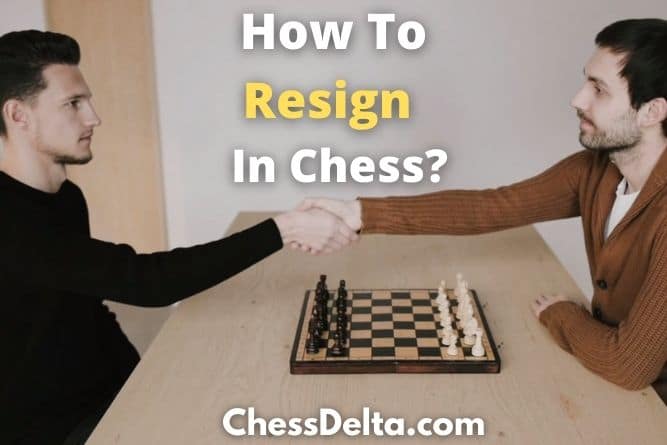 You might have seen professional chess games in which the chess players resign. But do you know how to resign in chess? Here’s how you should resign:

First, stop the clock, shake your opponent’s hand by making eye contact and giving a nod of approval, and then, after recording the result, sign the scoresheet. There’s no need to say something but if you want, you can say ‘I resign’ or ‘resign’ in a soft voice.

Generally, the position of the board, as well as your expression, will be self-explanatory so just nodding your head will do.

Even if in some games you are not required to record the moves in the scoresheet, then also after the game ends, a result sheet will be provided by the tournament officials in which you will be required to do the signature.

Some chess players think that you should tip the kings after resigning. But, tipping the king should not be done because it looks quite childish, and after doing that you have to again keep the king in the middle of the board.

So there’s no point in doing it. Instead, you should follow the standard method that every professional chess players follow.

If you are playing on a (DGT) digital chessboard, then keep the kings in the middle of the board so that the dgt board can indicate the final result.

To Know More Read: Why Do Chess Players Keep The Kings In the Middle? (Explained)

Ahead in this article, I’m going to discuss everything related to chess resignation etiquette and all other related questions that will clear your all confusion. So continue reading till the end!

Practical Example Of How To Resign In Chess

Here’s a video by ChessBase India, which you can watch to get an idea of how the professional chess players actually resign.

Hope you watched the video. Now let’s discuss how GM Vladislav Artemiev (on the right) playing against GM Magnus Carlsen (on the left) resigns.

This is how the grandmasters resign. You can consider this as a standard example because I think this is the best and the most polite way to resign in chess.

To cross-check the whole process and you can again watch the video (I have already set the video from the point where he resigns so don’t worry).

That’s it! When a player resigns it means that he or she has accepted the defeat and the game ends. A resignation is most of the time a pleasing outcome for the opponent.

So there’s no such strict requirement of following the etiquette, unlike draw offers where you can’t disturb your opponent by making repeated draw offers.

To know more, you can read my complete article on How To Offer A Draw And Accept A Draw In Chess.

However, following the standard chess resignation etiquettes is good from the point of view of good sportsmanship spirit in a chess game. Isn’t it?

At What Point Do You Resign In Chess?

You should resign when you think the position is hopeless and your opponent is stronger than you. Although it is advised not to resign and play until checkmate. But if you think that you are going to lose then you can resign.

I have written a detailed article on Why Do Chess Players Resign (Top 5 Reasons). Reading that you will be able to decide in which circumstances it is better for you to resign.

Now, you may have seen many players prefer to resign after they lose the queen. So may think why do they do so? is there any special etiquette in that case? Let’s discuss!

Resigning In Chess After Losing The Queen

After losing the queen, chess players lag behind their opponent in case of materials so much so that they even prefer to resign from the game. The etiquettes for resigning remain the same as discussed previously.

Queen is considered the most powerful chess piece. So a loss of queen can cause a major weakness that may be even unrecoverable.

So some chess players just accept their defeat as soon as they encounter this situation. But keep in mind it is not always that you should not resign after losing the queen.

The key takeaway is to determine the situation of the board, decide whether you can beat your opponent or not and then think of resigning.

It may happen that you resigned but later on, you realized that you could have beaten up your opponent with certain tactics, isn’t it? So just be careful.

Experienced players are more good at deciding when they should resign. But don’t worry if you are a beginner, this kind of skill will keep on developing as you play more games, make more mistakes and learn from them, right?

So that’s it! Hope you understood everything. If you found this article helpful then consider sharing this article with others. Thanks and have a nice chess game!

What happens if you resign in chess?

In chess, resign means giving up. So when you resign, you simply accept the defeat and get no points. While our opponent wins the game and gets one point.

How do you resign in chess.com?

On the chess.com playing window, there is an icon with the symbol of the flag and on the side of it you will find ‘resign’. So click on it and your game ends immediately.

Is it polite to resign in chess?

Yes, it is polite to resign in chess if you are quite sure you can’t win the game. It is rude if you keep playing in a totally hopeless position, just to harass your opponent by wasting the time and energy.