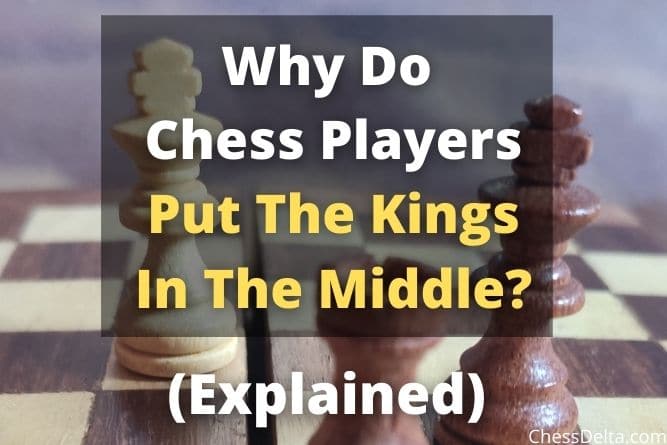 While watching chess games, many times when the game ends, you might have noticed that either the player or arbiter puts the kings in the middle. At that time the only question that comes to our mind. Why do chess players put the king in the middle?

Chess players put the kings in the middle because in tournaments most of the time DGT (digital) chess boards are used in which keeping the kings in the center of the board helps the software to detect the final result of the game and display it to everyone.

The result is interpreted as follows:

Now let’s dig in more deeper in this topic on what is the right method to put the kings, when to do this, how the board detects the result and in the end discussing the real game of grandmasters along with a related question. So continue reading!

How do chess players put the king in the middle of the chess board? (Right Method)

So this is the right method of putting the kings on the middle squares of the chessboard. One confusion you might have that where should you place the kings when it is a draw, right?

You can place either on e4,e5, or d4,d5 squares. But most of the time you should place the kings on e4 and e5 squares because firstly these are done by most of the players and secondly it seems logical because the kings normally start from e file.

Now let’s see when to do this and little bit about digital chess board.

Also Read: Why Is The Center So Important In Chess?

When do chess players put the king in the middle of the chess board?

Chess players put the king in the middle of the chessboard when the game ends. The game can end in many ways such as by checkmate, draw, or by resigning the game.

See, a DGT (digital chessboard) is the same as a normal chessboard but the only difference is that it is connected to the pc or say software. So whenever a chess player moves the chess piece, the sensors in the chessboard detect the movement of the pieces.

Then this information is sent to the software. This software then displays the output so that the viewers can see the chessboard position and analyze it. This is how the digital chess boards work.

Now, let’s see the incident when the kings are put in the middle.

Incident when chess players put the kings in the middle: Grandmaster’s Game

Here’s a video by ChessBase India which shows the game played between two grandmasters, Vishy Anand (left) and Praggnanandhaa (right).

Before moving ahead, I recommend, you watch this video because all the discussion in this section will be based on it.

So now it can be seen that Praggnanandhaa was going to lose the game. Therefore he paused the clock (in order to resign) and then shook hands with Vishy Anand. As per the chess etiquettes, right?

After that, he took his king and was trying to put it on one of the center squares. Note that here in this game Vishy is white while Praggnanandhaa is black. So since Praggnanandhaa lose and as we know when white wins the game we put the kings on light squares. Therefore in the end the kings are placed on e4 and d5 squares.

You can check that out by rewatching the video at time 14:52. Thus in this way, the kings are placed in the middle squares after the game ends.

Now you might think that who can put these kings in the middle, so coming to the next section.

Also Read: Why Do Chess Players Look Away?

Who can put the king in the middle: Chess player or Arbiter?

Either the chess player or arbiter can put the king in the middle. Generally it is a custom that after a game ends you should place the king in the appropriate middle squares to denote the result of the game.

But don’t worry because if you forget to do that then the arbiters are always willing to put the kings in the middle of the board. If you have watched the above video, you might have seen that when Praggnanandhaa (one of the youngest Indian Chess Grandmaster, right side in the below image) was putting the kings in the middle the arbiter assisted and stretched his hand to put the other king. See this still image from above video.

So, as you can see in the above image I have marked everything. You can also notice that there is a mark in the chessboard where it is written that DGT, which means it is a DGT chessboard.

One thing I have seen in many chess videos, the player resigns and puts the kings in the middle. I have already shown you the above video. Now you might think, what to do when we resign and when to put the king in that case. So the process is most of the time when you resign after you shake hands you put the king in the middle and done.

Also Read: Can A King Kill In Chess?

That’s it! Hope you understood everything. Please do share if you find this article helpful. Now let’s summarize everything whatever we discussed so far.

Hope you enjoyed reading this article. Thanks! Have a nice day!

What happens when there are 2 kings left in chess?

You can read my article: What happens in chess when only the king is left? to know more.

Where should kings go in chess?

Can 2 kings meet in chess?

No, 2 kings can’t meet or stand next to each other because by doing it the king gets into check which is illegal. Kings rather oppose each other.

To know more about this topic, read my article: Can A King Take A King In Chess? (Explained)