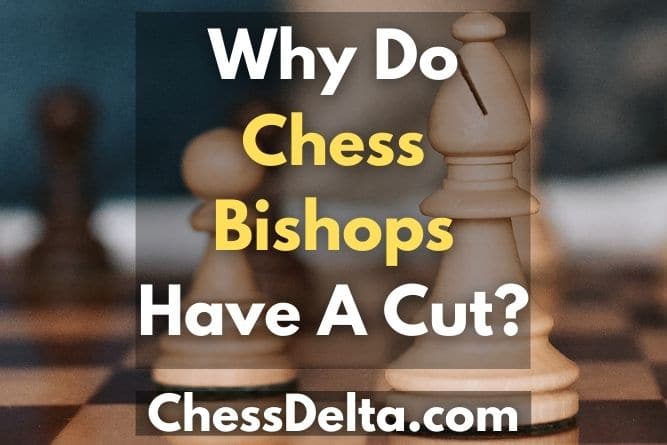 One day while setting up the chess pieces on the board, my eyes stuck on the cut on the chess bishop. I was wondering why this cut is present on this chess piece, what does it represent. I got excited, so I researched, and here’s what I got. Why do chess bishops have a cut?

A bishop in chess represents the bishops of the church who wear a tall headdress, tapering to a point at front and back with a deep cleft between. So the cut represents the cleft in the hat of church bishops.

The cut on the chess bishop is interpreted differently in different cultures.

When chess originated in India, it represented an elephant. In the pre-Staunton chess sets, you could find that the piece we call a bishop now, is having a very deep groove (slot) that actually represented the tusk of an elephant.

So as per Wikipedia, some have written that since the groove originated from the original form of the piece an elephant, the groove represents the elephant’s tusk.

In Italy, the bishop was called as the ‘Alfiere’ which means the standard-bearer (a soldier responsible for carrying distinctive flag of the unit).

In Germany it was called as ‘Laufer’ which means a runner.

In France, the groove was thought of as a jester’s cap (jester means entertainer in courts) and so the bishop was called as ‘Fou’.

In Slavic languages it was called as ‘strelec’ which means archer.

In Russia, the meaning of bishop remained the same, an elephant. So this way in different cultures the bishop was interpreted differently.

In England, the projection of the chess piece resembled a mitre, so there it came to be known as a ‘Bishop’.

Meanwhile, the Staunton chess set style which was first made available by Jaques of London became the standard chess set design worldwide.

Since the standard chess sets we use today are based on the Staunton design which was developed in Europe, the second theory is more appropriate.

Read More: How Does The Bishop Move In Chess?

Some Important Facts About Chess Bishops

Originally, the bishop was a very weak chess piece. It was allowed to move two squares along any diagonal, it could also jump over other pieces. But in total it was restricted to eight squares only.

Later on when chess reached Europe its status was changed from the war elephant to the bishop of the royal court. Although, it lost the power of jumping over the pieces its mobility increased.

Now the bishop was allowed to move up to any number of squares along the diagonals in a single move. It can move front as well back and capture any piece that comes on its way but remember, only one in a single turn.

That’s it hope you found this article interesting. Please do share these with others who don’t know why bishops have a cut. Here are other articles which you may like to read.

Can you win chess with just a bishop?

Can bishop jump over pieces?

Can a bishop take two pieces?

No, a bishop can’t take two pieces. In fact, in chess, a player can take only one piece in a single turn. You can read more about can you take two pieces in chess here.