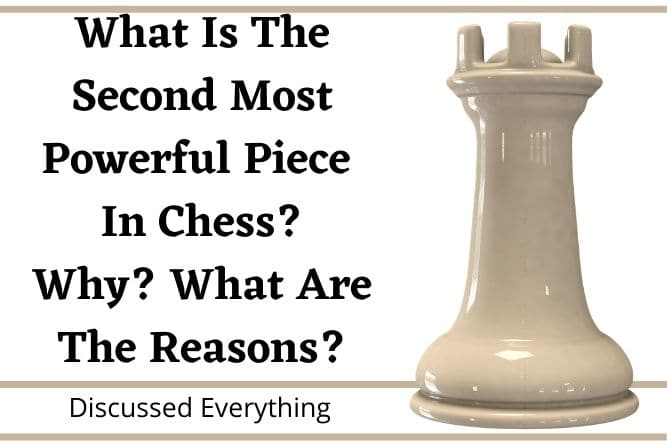 Rook is the second most powerful chess piece. Its relative value is 5 points. It can move horizontally as well as vertically controlling many squares. It can also checkmate a lone king with a king, which a single knight or bishop can’t do.

There are many strengths as well as some weaknesses of rook which we are going to discuss ahead along with reasons why rook is the second most powerful piece, comparing its power with other chess pieces plus some it’s its strengths and weaknesses.

So if you are keen to know about all these then keep reading till the end.

Why Rook Is The Second Most Powerful Piece In Chess?

In short, rook is the second most powerful chess piece because firstly its relative value is less than the queen but more than other chess pieces. Secondly, after the queen, it is the only chess piece that can control many squares at a time and deliver checkmate with a king, against a lone king.

Now let’s understand the power of rook in a more detailed way.

In that, the king is usually not counted because first of all, we do not exchange a king. Secondly losing a king means losing the game and hence it is priceless.

Now other than the king, all the chess pieces are given some value. In that, the queen has the highest value, 9 points, and after it comes to the rook which is assigned 5 points.

Read More: How Does The Rook Move In Chess?

Whereas a pawn is worth only 1 point. Pawn is the least powerful piece in chess.

It means losing a rook will be equivalent to losing 5 pawns in an exchange.

Thus this gives us a general idea but one thing to make sure that you should not only rely on this relative value system blindly. The position of the board also matters!

Thus, this is one reason with respect to which we can say that rook is the second most powerful chess piece.

Rook can control many squares irrespective of the colour

Next thing about rook is, it has the power to move horizontally as well as vertically. There is no colour restriction in its movement like a bishop. A bishop can move only on either the dark coloured squares or the light coloured squares. And this is one of the major disadvantages of bishop.

Also Read: When Should You Trade A Bishop For A Knight And When Not?

Rook is very helpful for the advancement of other pieces

Rook is a long range piece. It can control an unblocked file or rank completely. Due to these powers it is very helpful while advancing the other pieces.

Like if you want to move your pawn or knight and if you have an unblocked rook then you can utilize it to protect the file or rank where you want to place that piece.

Since rook will be threatening, so the opponent would not like to lose his/her queen or rook for your pawn or knight. Thus rook acts as a good guarding piece while advancing the other pieces.

Rook also has some special powers

Every piece in chess has some special property. A knight can jump over the other pieces which no other piece can do. And though a rook can’t jump, it has a very unique property.

You might know that you cannot castle under check (if not then check this article which will solve all your doubts).

You might also know that you can’t castle through or into check because the square through which the king will pass or will sit is under attack.

But do you know that you can castle even if your rook is under attack? Haha! Don’t get shocked if you came to know this for the first time because you are not alone.

Viktor Korchnoi, a very well known chess player was also confused when he wanted to castle but his rook

Check my article on castling when rook is under attack. In that, I have discussed this topic in more detail.

Other than this, a rook has the power to pin other pieces. (Pinning a piece means you attack your opponent’s chess piece in such a way that if he/she moves that piece than a more valuable piece will get exposed to attack by your piece)

Also Read: Can A Pinned Piece Give Check? (Explained)

Only a queen, bishop and rook has the power to pin any other piece in chess.

Rook is very useful in the endgames

A single bishop or a single knight with your king can’t checkmate a lone king of your opponent. Because there will always be a square for the opponent’s king to escape the check.

Read My Article: Why You Can’t Checkmate A Lone King With A King And Knight? To know more.

But if you have a rook then it is possible to checkmate a lone king.

Moreover, during the endgame when you get the chance to promote a pawn you generally promote a pawn to a queen, but do you know that a pawn is also promoted to a rook.

You might ask me, why would you promote a pawn to a rook? I know and for a detailed answer I would suggest to check the article.

But for here in short I can tell that, because although the queen is very powerful it is also very easy for it to stalemate the opponent’s king. Which you don’t want to do if you were about to win the game, right? Hence it is done so.

Rook is really a very powerful piece after the queen.

Read More: Why Is The Queen So Powerful In Chess?

In fact, rook and queen are considered major pieces in chess. Both can become great game-changer in chess if you use them properly.

But like a coin has two sides, every piece in chess has some strengths as well some weaknesses. It depends on the player how he/she uses it to win the game.

Though rook is the second most powerful chess piece it also has some weaknesses:

Apart from these there are no such major weaknesses.

That’s it! Hope you understood everything about the second most powerful chess piece.

Wait! Before you go, I highly recommend you to check out my complete guide on how to play chess. In that, I have explained all the basic chess concepts from start to finish, in the lesson by lesson format.

Thanks and have a nice day! 🙂