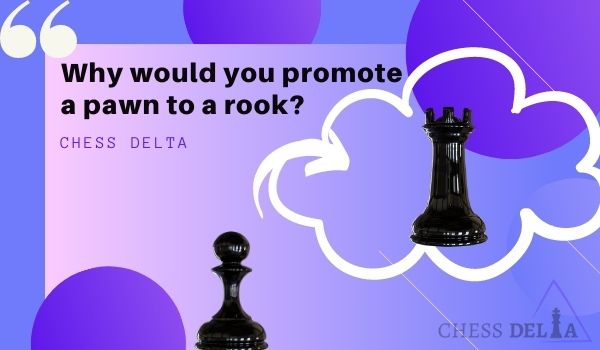 A pawn is promoted to a rook because there are situations where a pawn promoted to a queen results in a stalemate condition. Although it occurs rarely, it is good to avoid stalemate and promote the pawn to a rook.

A queen can control many squares but as in real life everyone has some weakness, queens also have.

There are situations where promoting to a queen proves to be a very bad decision. Instead of checkmating the opponent, we end up in a stalemate.

Basic concepts you need to know (In Brief)

Now before we do the case study, let’s brush up our concepts in brief about stalemate and pawn promotion.

When the player’s king is not in check and the player has no moves left to continue the game then the condition is known as a stalemate.

A stalemate results in a draw. Since it ends in a draw, many chess players try to avoid stalemate.

Also remember, a stalemate is different from checkmate because in checkmate the king is in threat whereas in stalemate it is not.

I have already written an in-depth article on the difference between stalemate and checkmate which you can check out to know more.

In layman’s terms, pawn promotion means when a pawn reaches the other side on the last rank then it gets promoted to a queen, knight, rook, or bishop. You can read more about this, in my in-depth article on pawn promotion.

When a pawn is promoted to a queen it is known as promotion or sometimes as queening.

If a pawn is promoted to a knight, rook or bishop but not queen then it is known as underpromotion.

Tip 🙂 – Do you know, how to offer a draw and also when is the right time to offer a draw? Then check out my article on the same where I explained this in detail.

Now let’s discuss the case study that reveals why sometimes promoting a pawn to a rook a good idea.

Case Study#1: What happens when b8 pawn promoted to a queen?

Let’s do this case study pointwise discussing each pieces position on the board along with their possible moves. (Note: It is black’s turn to move first in the situation shown in the image)

Now, I think you might have already guessed what this situation indicates, right? It is a clear stalemate condition. Here blacks king has no legal possible moves to save itself. So the game ends in a draw.

Tip 🙂 – Do you struggle to decide which side to castle? Then check out my detailed article on: Is it better to castle kingside or queenside?

Now, moving ahead on case 2 where the pawn is promoted to a rook.

Case Study#2: What happens when b8 pawn promoted to a rook?

(Note: It is black’s turn to move first. You can see this in the image.)

Thus black’s king is unable to save itself. Even the square on which it is standing now that is a7 is unsafe. Therefore this a clear checkmate.

So by this game position and case study, you can see that how promoting a pawn to a rook was more favourable than to promote it to a queen.

Now I know what next question you might ask. You will be thinking if there is an example of real life international game where pawn promoted to a rook was favourable decision.

The answer is yes, my friend! There is an example which we are going to discuss now.

Example of pawn promoted to a rook from Real Chess game

In 2006 Irish Championship, a situation occurred where promotion to a queen would clearly end the game to stalemate. Whereas promotion to a rook would help to a win.

This game was played between P. Short vs Daly. You can check out the Wikipedia article to know more about this game.

Before promoting a pawn to a queen, always be sure that we are not attacking any of the remaining squares of the opponent’s king. Otherwise chances of stalemate will increase!

This is so because if we block the opponent’s king and not allow it to move anywhere. This will give to rise to ‘no legal moves’ for opponent’s king.

Thus it will have no other option but to only stand on its own position satisfying the condition of stalemate.

Pawn promotion to a queen is most common. Whereas promoting a pawn to a rook or other minor pieces is very rare. But that doesn’t mean that it never happens.

We already discussed the case where pawn promoted to a rook was a favorable decision. So I hope you understood everything.

You can also read my other related articles:

So that’s it. Hope you liked this article. Please do share if you find helpful.

Can you promote a pawn to a pawn?

No, you can’t promote a pawn to a pawn. As per the standard rules of chess, a pawn can be promoted to only a queen, knight, rook, or bishop.

Can you promote a pawn to the opposite color?

No, you can’t promote a pawn to the opposite color. As per the standard rules of chess, a pawn can be promoted only to a queen, knight, rook, or bishop of the same color.

Tip 🙂 – Ever wondered, why chess boards are green in color? Then check out my article where I provide an inside look with reasons in detail.