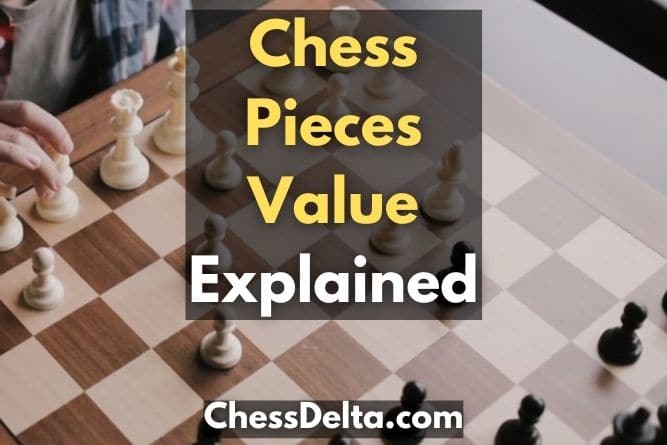 In chess, we assign points to each piece to have a general idea about the strength of the pieces.

In a chess game, pieces are captured as well as exchanged. Exchanging (trading) of pieces in simple words means when you sacrifice your piece to capture your opponent’s piece.

Here are the point values of chess pieces:

According to this point system, a pawn is considered the weakest piece in chess with only 1 point.

After that comes the knight and bishop with 3 points.

The next piece is rook with 5 points. It is considered the second most powerful piece in chess.

The queen is worth 9 points, the highest.

A king is assigned no points because you cannot capture a king in chess.

Rather a king is priceless (infinite) because whenever your king is checkmated you lose the game immediately.

Read More: What is checkmate and what are its rules?

So after seeing the points value and the mobility of the chess pieces (how chess pieces move was explained in the previous lesson so read that if you haven’t) on the board you might have well understood why the queen is so powerful in chess.

Important note: Don’t rely blindly on this point system because it is only for giving you a general idea. The position of the board also matters while considering whether you should exchange a piece or not.

Now, I know you may be still thinking, why the king is not assigned any points.

It is because these points are calculated on the basis of exchanging the pieces and in chess, we don’t exchange or capture a king. (Yes!)

In chess, a king is only checked or checkmated.

Read More: Can a king kill a king in chess?

So now, let’s move on to our next lesson about the basic chess rules every chess player should know!