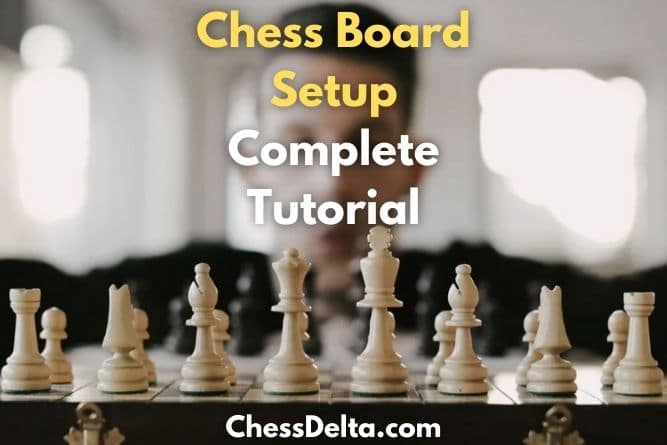 Here are the key points you need to know related to the chess board structure and setup.

Trick Time!: To remember what are rows and what are columns: both “rows” and “rank” start with the same letter ‘R’. So you can remember them in that way. What remains is the “file” which simply means “column”. Easy?

What are the positions of pieces on a chess board?

The pawns occupy the second row of each side, rooks occupy the corner squares, after that the knight and then bishop.

Out of the remaining two squares, king and queen are placed.

Finally the remaining square on the first row, the king is placed.

What are the squares on a chess board called?

See the image of the chessboard below. I have marked the position ‘d5’.

Any chess piece if kept on that square will be said to be on the d5 square. Moreover, the positions of the chess pieces when represented in the written format they are known as notations.

The chess players write these notations on each move they make in the professional chess games in a scoresheet. You can read my article on Why Do Chess Players Write Down Their Moves.

Now here I’m going to ask some questions whose answers are also given. You have to first guess and then check yourself. So let’s start!

Some Rules You Must Know After The Chess Board Setup:

Note: These are just the very basic rules that I think you need to know at first (after completing the chess board setup). You can read the FIDE Laws of chess. FIDE is The International Chess Federation.

You can also read my article on the basic rules of chess every chess player should know. So you can directly skip to that lesson or read the next lesson.

So that’s it! I hope now you have completely understood how to setup the chess board and all the related things. In case you directly landed here, I want to inform you this article is the part of my how to play chess basics series. So if interested you can check out the lessons list below.

Go to Next Lesson: How Chess Pieces Move ->

Lesson #3: Chess Board Structure And Setup ( You are here 🙂 )