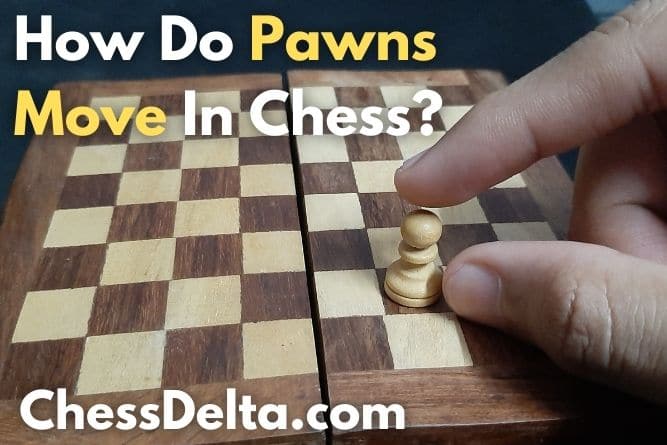 Chess is a game of strategy and tactics, with one king, one queen, two bishops, two knights, two rooks, and eight pawns, where the pointing system is divided accordingly, where the pawns hold the least rank.

If you are here reading this, then hopefully you know how to play chess or learning it. To play a better game you need to know all the things about each piece, especially the movements of each piece.

So now, since you have a knowledge of how to play chess and the names of all the chess pieces, it is time for you to know about the pawn.

In the game of chess, pawns are treated as the least ranked chess piece amongst others.

But a good player is someone who looks at the entire board and gives importance to each of his pieces. In terms of chess pieces value, the pawn holds just a single point. Pawns are a total of eight in number. So 8 points of pawns which is more than a combined set of bishops and knights.

However, pawns are equally important, unlike other pieces.

To know more about how pawn moves, how they capture, and all other related things, keep reading till the end!

How Do Pawns Move In Chess?

The pawn is the least powerful piece of chess.

They are aligned in the second and the seventh row on the chessboard, guarding the frontal movement of all the pieces except the knight at the start of the game.

The pawn can only move forward if it is not blocked by another piece, obviously. A pawn moves only one square at a time. However, in the first move only, a pawn in a chessboard can move one or two squares at a time.

It is a point to be focused on, that if a pawn has moved already, it cannot move two squares again in the game. So a player gets the chance of moving its pawn only on its first move. Rest, in the entire game, the pawn can move only one square at a time.

How Do Pawns Capture In Chess?

The pawn is the least rated piece but follows the most unique style of capturing amongst the other pieces. It is the only piece that captures in a different way than it moves.

For example, if a pawn is placed at e4, it can capture the pieces of the opponent placed on f5 and d5, but not on e5.

Also Read: Can A Pawn Capture On Its First Move?

This is very common to know that a pawn is the weakest piece on board but do you know that pawn has got the most dangerous power amongst all the men? Yes, a pawn can be as powerful as a queen or any other piece, just by a promotion.

A pawn can be promoted to bishop, knight, rook, or queen. To promote a pawn, you have to take your pawn safely to the last row opposite to you without being vulnerable to any other piece.

Depending upon the player’s choice, the pawn gets promoted if it reaches the last row. For example, if a pawn reaches a8,b8,c8,d8,e8,f8,g8, or h8, then it has the power to be promoted.

Recommended Reading: What Happens When A Pawn Reaches The Other Side?

The most surprising but amazing power that a pawn possesses, can surprise a lot of players, especially the new ones.

The name En Passant in the name itself has an element of surprise. Generally, this is not a common term to be known even by some chess enthusiasts.

This type of capture can only be made on the move immediately after the opponent pawn makes the double-step move. Otherwise, the right to capture it en passant is lost.

To understand more about En Passant, let’s take an example. (assume you are playing with white for example)

Now, there are certain things you need to consider for performing En Passant:

To know when to do en passant in the game, you need to be keenly focused on when the opponent is moving his pawn. Also, you need to make sure whether you are fulfilling all the required conditions or not.

If you want to know more about En Passant, check out my article on En Passant In Chess (All You Need To Know!)

When To Move The Pawns In Chess?

After you know how the pawn moves a basic question that comes to mind is when to move a pawn.

Generally, The basic first move should be a pawn of the king as it provides an open area for the queen to move, plus one can capture the center with the help of a pawn.

You can choose e4 opening. But if you are playing games with different openings, and you already know what you are going to do in the upcoming moves, then you can place your pawn on the first row as your first move.

Followed by the first move, try to protect your pawn with another pawn of the adjacent box, if not then go with the major pieces. Also, trying to build a shield with your pawns is such a way that your men are not blocked but protected from the opponent.

Along with knowing how a piece moves, it is very important to know the positioning of your piece.

Pawn positioning is very important to build a  perfect strategy to win a game, as it helps to safeguard a major piece. Given below are some details about the pawn position in a match.

A pawn is just theoretically the least important piece on the chessboard. But practically it has so many powers and innovations to offer. Indeed chess is an intense game, but the pawn makes it more interesting by spicing up with moves like promotion and En Passant.

After reading this, you already know how to play your pawn properly to get the best out of the attacking and defending strategy. You are now aware of the positioning of a pawn, how they move, when to move them, how to promote them, how to En Passant, and most importantly, how a pawn captures the opponent in its own unique way.

A pawn is definitely one of the most useful pieces on the board. As a chess enthusiast, you can use it first to attack, then to defend, and lastly to surprise your opponent with En Passant and Promotion.

How Many Spaces Can A Pawn Move On Its First Move?

On its first move, a pawn can either move two spaces or one space to the forward squares if those squares are unoccupied. However, if the squares in front of the pawn are blocked then the pawn can’t move until those squares become empty.

Can A Pawn Kill On Its First Move?

A pawn can kill a chess piece on its first move only if that piece is on the diagonally forward adjacent square. Other than that the pawn cannot kill the piece.

Can A Pawn Move Diagonally Without Taking Piece?

No, a pawn can’t move sideways. A pawn can only move forward or diagonally but not sideways. While moving, a pawn only moves in the forward direction. However, a pawn captures any piece diagonally.