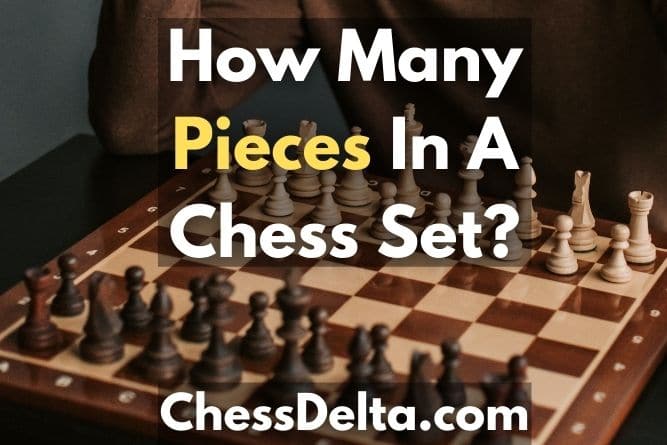 In this article, I’m going to explain how many chess pieces are there in a chess set, what are their names, and other related things. So without further ado, let’s start our discussion with the very first question.

How many pieces in a chess set? In a standard chess set, there are 32 chess pieces, 16 on each side. So at the beginning of the game, each player has 16 chess pieces on the chessboard. All the chess pieces move and capture opponent chess pieces according to the standard rules of chess.

I already have a detailed article on the basic chess rules every beginner should know. So you can check that out but before that, let’s have a basic introduction about the chess pieces.

What are 16 chess pieces in chess called?

The 16 chess pieces which are sometimes called chessmen include 8 pawns, 2 bishops, 2 knights, 2 rooks, 1 queen, and 1 king. Pawn, bishop, knight, rook, queen, and king are the standard names of the chess pieces.

The color of the chess pieces is of two types, dark-colored (black) and light-colored (white). Here’s how the correct chess board setup looks like:

As you can see in the above image, there 16 black and 16 white pieces.

Now after knowing about the chess pieces names, you may think why they have such specific names, right?

Also, in some regions the chess pieces are well known in their local names.

So for that, I highly recommend you to read my article on Why Are Chess Pieces Named What They Are?.

How many chess pieces do you need?

Chess is a two-player game where each player has 16 chess pieces. You need all the chess pieces to play the game, to attack, to defense, and finally checkmate your opponent’s king to win the game.

You can’t neglect any chess piece while playing a game. Each chess piece has its own value on the board.

A player’s main thinking while playing a chess game is to attack his or her opponent, defend, and reach the ultimate goal of checkmating the opponent king by which he or she can win the game.

Checkmate is condition in which the player’s king is totally trapped and the player can’t save if from the attack of the opponent chess pieces.

You can read more about what is checkmate and important checkmate rules here.

What is each chess piece worth?

In chess, there is a chess piece relative value system according to which each chess piece is assigned a particular point value.

As you can see the pawn is the least powerful chess piece. The rook is the second most powerful piece in chess.

Whereas, the queen is the most powerful chess piece on the board, right?

Where’s the king? I know you may ask that.

And the answer is because the king can’t be captured in chess. The chess piece relative value system assigns the point value to the chess pieces based on their relative strength in potential exchanges.

Also, note that this point system is only for giving a general idea about the strength of the chess pieces.

You should not make your moves blindly relying on this system as the position of the chess pieces on the board also needed to to be considered by the player.

Check out my in depth article on Chess Pieces Value.

So this was all about how many chess pieces are there in a chess set and their introduction.

Now, if you are interested to learn how to play chess then I highly recommend you to read my Complete Beginner’s Guide On How To Play Chess. In that, I explain all the chess basics step by step.

So that’s it! I hope you liked reading this article. Please do share this article if you found it helpful as it encourages me a lot. Thanks, best of luck for your next game.