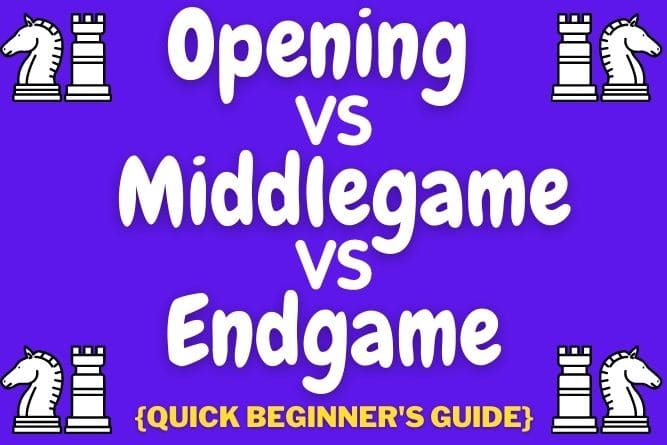 So, you have started learning the basic concepts of chess. And now while studying all these, you came to know that there are three phases in a chess game: the opening, the middlegame, and the endgame.

But do you really know what is the perfect meaning of each of them? What’s the difference between them? What happens in each of those three phases and how to play accordingly? If you are interested to know all these then continue reading this lesson till the end!

What is the difference between the opening the middle game and the endgame in chess?

Opening is the starting phase of a chess game in which centre control, piece development, castling and connecting the rooks take place. Middlegame is the middle phase in which chess pieces attack and defend each other. Endgame is the final phase in which most of the pieces are exchanged and each side tries to checkmate each other.

As a chess beginner it is really important to understand these three phases of a chess game since they build your foundation. How can you know when to do attack or defense if you can’t identify the middle game and evaluate the position. Right?

In chess evaluating the present position is very important because on the basis of that only you would make strategies and use your tactics. Unless you know these phases, you won’t be able to plan out the game properly.

So let’s look at each of these three concepts one by one.

What is the opening in chess?

As the name suggests opening means the starting phase of a chess game. It starts with controlling the centre, developing the minor pieces, castling, developing the queen and finally ends by connecting the rooks. As a general rule of thumb opening lasts within the first 10-12 moves until the rooks are connected.

After that starts the middlegame. There are certain fundamental opening principles that every chess player follows while playing the opening.

First and foremost it is important to have the central control on the board right from the start. The chess pieces when placed at the centre are more powerful and active. So either with the king’s or queen’s pawn or any of the two knights the opening is made controlling the centre four squares. To know more read, Here’s Why Controlling The Centre Important In Chess.

After this, the minor pieces (bishops and knights) are developed. Generally knights before bishops because they are short-range pieces.

After the minor pieces are developed, if the squares between the king and rook (on the kingside) are empty then short castling (also called kingside castling) is done.

If the player wants to do the long castle (queenside castling) then first the queen is moved and then castling is done. Read this article to know more about this.

So now after the castling is done and the queen is developed finally it is the time to connect the rooks. It is very important to do so because connected rooks are more powerful than single rooks.

Also rook is the second most powerful piece in chess after the queen. It helps in advancing pieces since it has the ability to control the whole file from a long distance. So, after the rooks are connected the game enters into the middlegame phase.

If you want to get the complete detail about these opening principles then definitely check out my article, 11 Fundamental Chess Opening Principles That Every Chess Player Should Know.

Goal – The main goal of a player during this phase is to develop the pieces as quickly as possible along with keeping the control over the centre of the chessboard and protecting the king.

What is the middlegame in chess?

Middlegame is the middle portion of a chess game. As a general rule of thumb, middlegame starts, after all the major and minor pieces are developed, castling is done and the rooks are connected. All the attack and defense takes place during this phase.

In this phase the key idea is to find weak areas in the opponent’s camp and attack them. To look for the unprotected pieces. To find the tactics to win the free material of the opponent. If there is no weakness then to create weakness and for that making proper plans and strategies.

Since during this phase, each side tries to attack each other, exchanging of pieces takes place.

Also Read: Should You Exchange A Bishop For A Knight? (Complete Guide)

The player tries to free up the files (columns) of rook so that they can take part in the game more actively. Bishops are placed in unblocked and longer diagonals so that they can attack the opponent more effectively.

Goal – In this phase the main goal is to determine the weak areas of the opponent and attack them to get material advantage. If already attacked then to defend and restore a better position.

What is the endgame in chess?

Endgame as the name suggests is the final phase in a chess game. The transition between the middlegame and the endgame is generally hard to determine. As a general rule of thumb, an endgame starts when there are few pieces on the board and the king can take part in the game more actively.

There is a lot of debate in the chess community about the exact time when the middlegame ends and the endgame starts. Some say the endgame starts after the first 30-40 moves (which may obviously vary) while some say when the only two-three pieces (excluding the pawns and the king) are left on the board.

The best idea which most of the standard chess books also refer to determine the start of the endgame is the time when the king can come out freely and start the attack on the opponent. In the endgame the king is considered more like the other chess pieces.

In the previous two phases the king was given the special status and was protected. But when the endgame arrives it is the time to take out the king and help the other pieces in checkmating the opponent’s king.

The pawns were not considered so dangerous in the early phases but in the endgame they become lethal just because, now there are less pieces on the board so they can get promoted.

A pawn is generally and most often promoted to a queen. This is also called queening. But in certain situations queening the pawn can cause stalemate.

To know more read this article: Why Would You Not Promote A Pawn To A Queen? (Explained)

Stalemate is a  position in which the king is not in check but it also doesn’t have any legal moves to make so the game ends in a draw. Now if you were in a winning position, would you like to be satisfied with a draw just because of a stalemate, No!

Also Read: How To Avoid Stalemate In Chess? (5 Tips That Actually Work!)

So instead of promoting a pawn to a queen, the pawn is generally promoted to knight, rook or a bishop. Promoting a pawn other than a queen is known as underpromotion.

Moreover, passed pawns which means there are no opposing pawns on the adjacent file are more dangerous. Since you can’t prevent these pawns easily from reaching the last rank and getting promoted.

Goal – The only goal of the player is to checkmate the opponent king. To fulfill this goal a player tries to promote a pawn so that it could assist the other pieces in checkmating the opponent’s king.

And by the end of this lesson we have also completed our chess basics: the complete beginner’s guide on how to play chess.

Note that the main motto of this chess basics series was to teach you all the basics of chess and give you a sort of basic overview.

And I hope you have understood whatever I discussed with you so far.

Now what are you waiting for? Start playing chess games and enjoy. 🙂