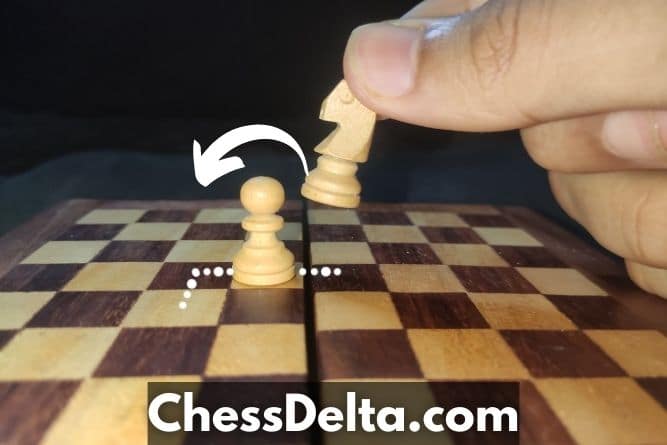 You may be learning about how chess pieces move. And a question may have come to your mind. What chess pieces can jump?

And check out the best chess sets on Amazon here.

Can knight jump over other pieces?

Knights move in an L shape pattern as you can see in the above image. And so if any piece, whether it is your piece or your opponent’s piece. You can move your knight by making it jump over them.

If the opponent piece is occupying the square where your knight can land, then you can just move your knight, replace that piece and put your knight on that square. And by this way you are capturing the piece with your knight.

Watch this video by Howcast to see how the knight actually moves in chess.

Can pawns jump over other pieces?

No, pawns can’t jump over other pieces. Pawns can only move one step forward except in the first move when they can either move one or two steps forward. While capturing any piece, pawns move diagonally one square in the forward direction.

Always remember pawns can never move backward. Here are my helpful articles related to pawns. So check them out to clear your doubts.

Can bishops jump in chess?

No, bishops can’t jump in chess. Bishops can only move diagonally up to any number of unoccupied squares. In chess, each player has two bishops that move only along the diagonals.

As you can see, each chess player has two types of bishop.

Can a rook jump over other pieces in chess?

No, a rook can’t jump over the pieces. A rook can only move vertically or horizontally up to any number of unoccupied squares on the chess board. In chess, each player has two rook that are placed on the corner squares of the chessboard.

As you can see, the rook can move either horizontally or vertically. If it is your own piece on the path of your rook, then it gets blocked.

However, if there is an opponent piece along the path of the rook then the rook can capture it. So you can replace that piece, and place your rook on that square.

Also one thing to note that in chess, you can capture multiple pieces in a single turn. That means if there are two opponent pieces along the path of the rook, the rook can’t capture both in the single turn.

I have written a dedicated article on how the rook moves in chess. So I recommend you to check it out if you want to know more about the rook moves.

Can queen jump over other pieces?

No, the queen can’t jump over the pieces. In chess, each player has one queen that can move in any direction and up to any number of unoccupied squares.

A queen is most powerful piece in chess (see: Why is the queen so powerful in chess?).

A queen can move up to any number of unoccupied squares horizontally, vertically, or diagonally. It can capture any opponent piece that comes along its path but as I said, only one in a single turn.

Despite being so much powerful the queen can’t move like a knight. In fact, the jumping ability of knight is the thing that makes it unique, isn’t it?

You can read about how the queen moves in chess here.

Can a king jump over other pieces?

No, a king can’t jump over other pieces like a knight. A king can only move up to one unoccupied square in any direction. In chess, each player has the king.

I already have a detailed article about how the king moves in chess. You can check that out if interested to know more about the king moves.

So I hope you understood which chess pieces can jump in chess and which cannot jump. Please do share this article with others if it was helpful.

That’s it! Thanks and best of luck for your next chess game 🙂