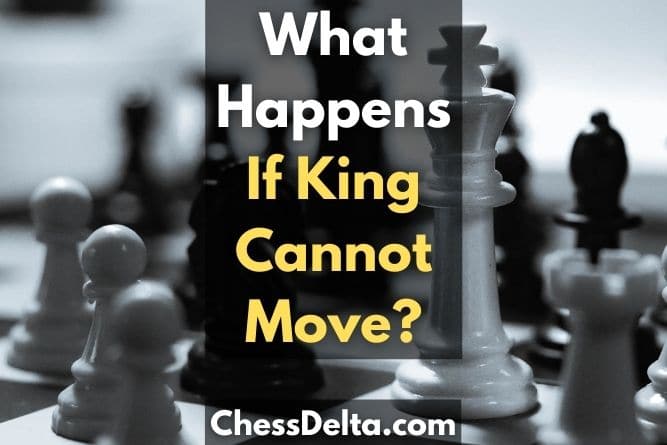 Are you are not able to move your king? Then you are in the right place because in this article I am going to solve all your doubts regarding this question from start to finish. Let’s start!

In a draw, both players get equal points. But in a checkmate, the player who gets checkmated loses the game and gets no points.

That being said, let’s dive in deeper and understand all these concepts in a little more detail.

Checkmate is a condition in which the king is under threat but has no legal moves left to get out of it.

Here, being ‘under threat’ means the king is under check. So whenever the king is in check and can’t get out of it, then we call it a checkmate.

The game ends immediately whenever a checkmate occurs.

How does a checkmate happen in chess?

If you notice the following conditions then it is checkmate:

Actually, in chess there are three ways to get out of check:

So when neither of these ways are available to save the king then it is the condition of checkmate.

Why a king can’t move in checkmate?

A king can’t move in checkmate because the king is under attack and also there’s no safe square available where the king can move.

See this example, the black king can’t move because it is checkmated.

Hence the black king can’t move in this case. By the way, if you are interested you can also check out my complete beginner’s guide on how to play chess. In that, I have discussed all the chess basics from start to finish in different lessons.

Stalemate is a special situation in which the king is not under threat but the player has no legal moves left to continue the game.

When you are in checkmate condition your opponent attacks you. Your king is under the threat. However, in a stalemate, your opponent doesn’t attack your king.

So technically, your king is in a safe position. But all the remaining squares available to your king are blocked. Also, you don’t have any other move to make because either your all remaining pieces are captured or they may be also blocked.

Thus in stalemate, although you can’t move, the player hasn’t checkmated you (which is necessary to win the game).

So neither you nor your opponent is in a position to win the game. Therefore in a stalemate, the game ends in a draw.

How does a stalmate happen in chess?

If you notice the following conditions then it is stalemate:

So if all these things happen then it is the condition of stalemate.

Why a king can’t move in stalemate?

Stalemate is a situation in which the king is safe but has no safe squares left where the player can move it. Hence the king can’t move in a stalemate.

In this example, the black king can’t move because this is the condition of a stalemate.

So in short, here the black player has no legal moves left to continue the game, and also the king is not in check. Therefore it is a condition of a stalemate.

You can also read the following articles related to stalemate:

Now as I said earlier stalemate is one of the most common draws that occur in a game. But there four other ways in which a game can end in a draw.

And in those draws also you are not able to move your king. So let’s discuss them!

Other types of draw in which the king can’t move

It is a type of draw in chess, which occurs when both players mutually agree for a draw. So if you and your opponent agree to draw then no matter where your king is you can’t move your king in fact you don’t need to do it too!

Whenever the same position is repeated for three times then the player can claim for a draw. But if forgets then according to new fivefold repetition rule the game ends in a draw automatically after the repetition of moves for at least five times.

You can read my article about repetition of moves in chess for further information on this topic.

As per the standard chess rules, If no pawn movement and no capture has been made within the last 50 moves then the player with the turn to move can claim for a draw. However, if he/she forgets, then the game is automatically drawn by the new 75 move rule.

The 75 move states that if no pawn movement and no capture is made within the last 75 moves then the game is drawn by the intervention of the arbiter (referee).

If either of the players has insufficient material (pieces) to checkmate each other’s king then the game is immediately drawn. So for example, if you and your opponent both have only the kings then the game is drawn.

This is because neither of the players can’t checkmate each other in that case. You can read more about this in my article What happens when two kings meet in chess?

So I hope you found this article helpful. If interested, you can also check out my following resourceful articles: